What happens when your alternator completely fails? Your car will run on its battery until the battery is drained. Then the car won't start, and you might be stranded. We recommend checking your alternator and replacing it if needed as soon as you notice the symptoms of a failing alternator.

Learning how to recognize the symptoms of a failing alternator is the first step towards preventing battery failure. Keep an eye out for the following symptoms:

Why Do Alternators Go Bad? 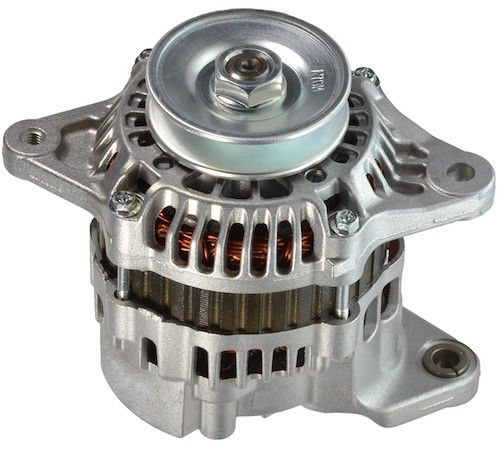 There are several common reasons alternators fail, which are:

Whatever the reason, the entire alternator will need to be replaced. It’s quite easy to find an OEM replacement. We sell genuine OEM Mitsubishi parts, including alternators. Look up your Mitsubishi model in our catalog and then you’ll find the right part number for your car. Here’s also a list of our top selling OEM Mitsubishi alternators:

How to Diagnose a Bad Alternator

First, you need to confirm that your car’s electrical system isn’t getting enough voltage. All you need is a cigarette lighter voltage gauge. You can get one of these things for under $10 on Amazon.

But before you test the alternator, make sure there aren't any problems under the hood. Check these things:

The voltage meter will then show your battery’s at rest voltage. It should be between 12.6V and 12.9V. If it is between 12V and 12.5V, your battery is not fully charged. (If it is less than 12V, your battery is completely flat.) This could mean that you have a bad battery, or the alternator could be going bad. The next step will point you in the right direction.

Now start the car. The alternator will start charging the battery. For most modern vehicles, your voltage gauge should show 13.9V - 14.2V with the engine idling. (This number varies a bit by vehicle. Google your vehicles battery charging voltage to be sure.)

If the voltage shown starts dropping below the resting voltage of the battery, the alternator is really weak or completely dead.